Algerian captain Riyad Mahrez believes his side used their chances well to floor Guinea in the Africa Cup of Nations on Sunday night.

The Manchester City player scored a fine goal as the Desert Foxes beat Guinea 3-0 to reach the last eight of the competition in Egypt.

Youcef Belaili broke the deadlock 24 minutes in with a precise finish and Mahrez made the win safe in expert fashion before the hour mark, with Adam Ounas adding gloss to the scoreline following a swift counter-attack. 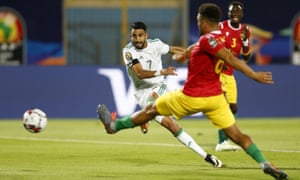 Mahrez now says taking their chances against a well drilled Guinea side helped his side to the huge win.

“I think we did a solid match against a good Guinea team, it wasn’t easy, we didn’t concede, we scored three. It was a good night for us,” Mahrez said after the match.

“We’re serious, we played our match, they weren’t an easy team – we scored in the key moments, we took our chances, and when you don’t concede a goal you have a chance [of winning].”

Djamel Belmadi’s side, yet to concede a goal in the 2019 finals, made light work of their opponents in front of a sparse crowd in Cairo.

Algeria allowed only one shot on target throughout the match as they underlined their credentials as one of the favourites for the title, their chances having grown following the shock exits for Morocco and host nation Egypt.

Algeria will head into a quarter-final against either Ivory Coast or Mali in confident fashion.

McGregor back to his best with TKO against Cerrone