Briton takes on world heavyweight champion Ruiz for his WBO, WBA and IBF titles knowing that his second chance against the Mexican-American is much like the story of his boxing upbringing

Never mind the fame, fortune and nigh-on universal adulation even in defeat, British boxing’s golden child Anthony Joshua believes he has just entered the final third of a 15-year ‘prison sentence’ which began back in 2008.

The 6ft 6in heavyweight touched down here in Saudi Arabia last week ahead of what could become the defining moment of his boxing career, when he takes on world heavyweight champion Andy Ruiz for his WBO, WBA and IBF titles.

The so-called ‘Clash on the Dunes’ is the highly anticipated rematch of Joshua’s shuddering defeat at the hands of Ruiz, when he was floored no fewer than four times before being waved off in the seventh round as he steadied himself against the ropes of his own corner.

Many have suggested that a defeat in Diriyah, the Unesco World Heritage Site which sits just past the western border of Riyadh, could bring the gravel down on Joshua’s entire career but the challenger is adamant that his initial plan still has years to run.

It was formulated in Reading, as he counted down the hours of his two-week spell on remand in prison for a reported charge of affray. He was staring at a 10-year stretch behind bars right in the face at the time but he pledged his life would change forever if he got off. He did.

“When I had that second chance at life when I was getting in trouble, I just dedicated myself. I said I would put myself on a 15-year prison sentence to boxing and have that focus.”

That was 2008, when he was a tall, skinny kid who spent too much time laughing and joking with his clubmates for his coaches’ liking. With that in mind, he’s got four years left before he’s a free man.

“I could go on longer,” he adds. “It’s just a mindset, a prison mindset, like a military mindset, lock-down. Training, focus, sleep. You have to have that mindset. You have to be in that regimen. 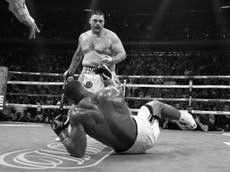 “Have I achieved way more than I thought I would back then? I never have a chance to think about that stuff. I got into boxing and it just rolled out in front of me through hard work. I just got in and did it.”

The notion of a prison sentence for Joshua, who has spent time visiting the purpose-built, open-air Diriyah Arena since his arrival in the desert, might make it seem as if the enjoyment is gone, that he may have become institutionalised by a sport well versed in sucking the life from young men.

“You are going to see get better every step of the way. Look back at my career and you can see you almost never see the same fighting style in each fight. I can always change my style and am always developing.

“In the next fight you will probably see another version of AJ. I have been boxing 11 years now and I have always been on top, from the amateurs to the pros so this has been six months of letting Andy Ruiz take all that pressure.

“You have seen all the stuff he has had to deal with, we have been dealing with that for 10 years now, it is a breath of fresh air.

“I am no longer focused on any other opponent that Ruiz, it is good to just be focused on one guy.”

Even without the belts Joshua remains the favourite with bookmakers, is undoubtedly the biggest draw of the two here in Saudi and will earn significantly more than the champion for his part in the clash.

The fight is part of the Diriyah Season, with Eddie Hearn’s Matchroom Sport cutting a lucrative deal with Saudi’s General Sport Authority to stage the fight at a time when the country is in active conflict with bordering Yemen in the south.

But after Brits George Groves, Callum Smith and Amir Khan all boxed here in Saudi, albeit in Jeddah, over the past 18 months, Saturday night looks set to be the latest step on an unlikely journey to making Saudi Arabia another of the world’s boxing destinations.

Joshua was denigrated for his performance against Ruiz nearly six months ago and was then criticised by the likes of Amnesty International for his decision to have a fight of this magnitude in Saudi.

“Not everyone’s going to love you, and that’s just how it goes,” he said of those writing him off in the wake of his 1 June defeat.

“I’ve lost before, I’ve lost a few times and I just keep on going.

“The good thing about boxing is I had the same passion when I wasn’t known so being known or not known doesn’t define my passion or what I want to achieve, or me as a person.

“It’s just more opinions really and everyone’s entitled to their own, but if you’re going to ask me about mine I still think I’m going to go and do great things in boxing.

“That’s why it doesn’t hurt because I know how much I’ve got to give to the sport.”