The win lifted Arsenal to 60 points, just one point behind their north London rivals Tottenham Hotspur, who are third, and two points above United.

Earlier on Sunday, second-placed Liverpool beat Burnley 4-2 to move on to 73 points, one behind leaders and champions Manchester City, with the battle for the title now looking to be a two-team race.

“It has been fantastic so far but today is the the lowest we have been because we lost and we missed the chance to put pressure on Spurs,” said Solskjaer, who was brought down to earth after United’s astonishing midweek Champions League triumph at Paris St Germain.

“We have won games we have not deserved to win and today we lost a game we did not deserve to lose.”
In a keenly-fought 200th league edition of one of English football’s great fixtures, Arsenal went ahead in the 13th minute when Xhaka belted a shot from 30 metres out, with United keeper David de Gea seemingly wrong-footed by the curve of the ball.

“He must be Brazilian the way he struck the ball, the way it swerves,” Solskjaer said.

United hit the woodwork either side of the goal, with Romelu Lukaku heading against the crossbar first and Fred striking the post minutes later.

Lukaku had a golden opportunity to score from close range early in the second half but his first touch was heavy and, as he lunged to shoot, goalkeeper Bernd Leno blocked the shot with his body to send the ball spinning up and over the bar.

Marcus Rashford was then at the centre of the action as United tried to pull themselves level. The England striker smashed a freekick wide after Aubameyang bundled Paul Pogba to the ground 25 metres out.

Rashford was through on goal again moments later but could not get his shot away as Leno rushed forward and got down to collect the ball.

Arsenal won a very soft-looking penalty in the 67th minute when Fred was judged to have brought down Alexandre Lacazette, with the replay showing that the Brazilian barely brushed the Frenchman’s side as they ran for the ball. 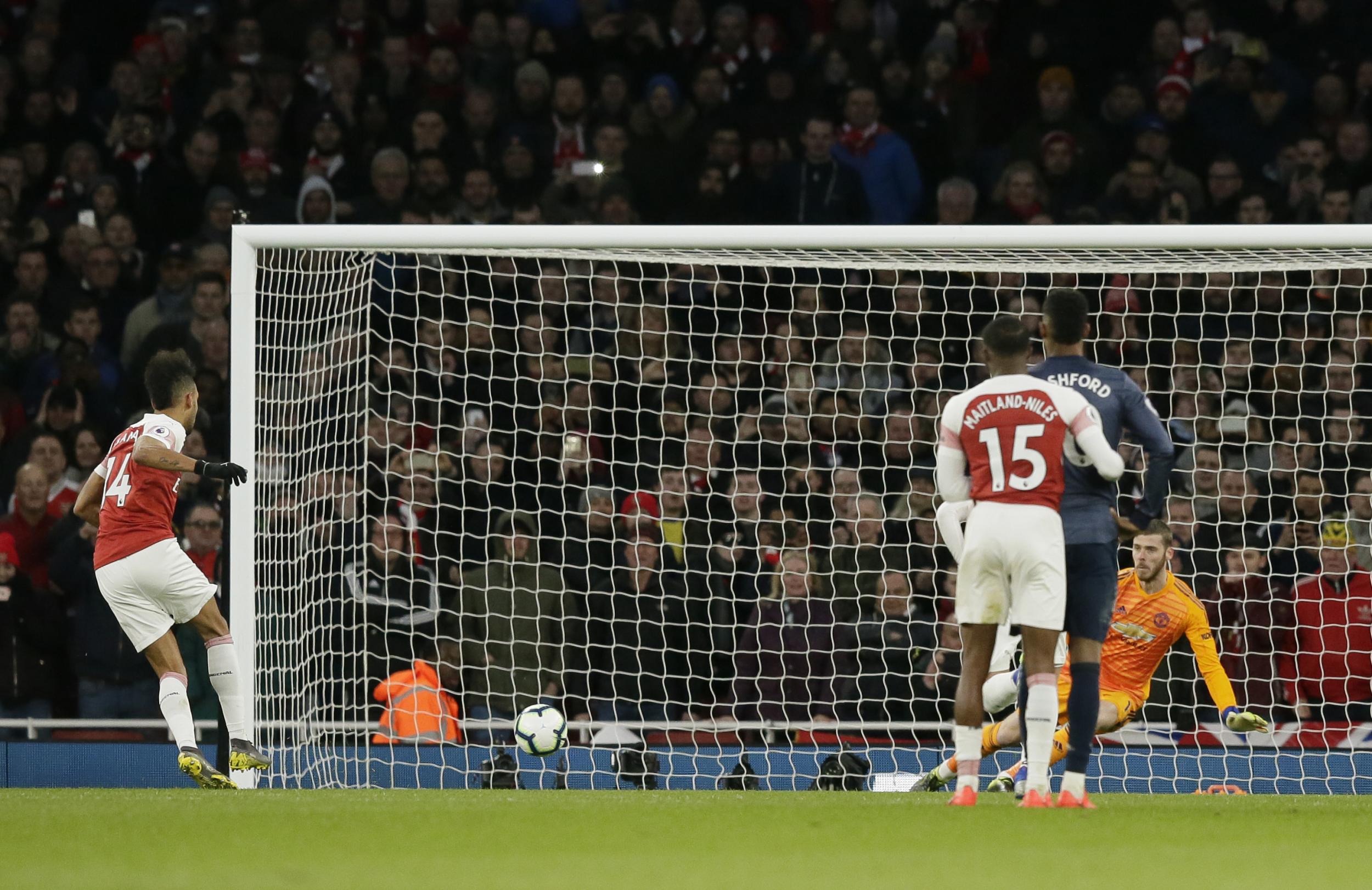 Aubameyang converted the penalty, making up for his missed spot kick at Tottenham Hotspur a week earlier.

“I made a mistake against Tottenham, looking down at the last moment, not watching (Spurs keeper Hugo) Lloris, but today I watched until the end, and being focused you score a penalty,” the Gabonese striker told Sky Sports.

Even Arsenal manager Unai Emery said the decision looked generous to his side but he added that it made up for the one that went against them, and that Tottenham’s Harry Kane scored from, when Arsenal visited Spurs.

PITCH INVASION
In the second pitch invasion incident in one day in English football, a man ran on after Aubameyang’s goal and shoved United defender Chris Smalling.

He then approached Arsenal players with his arms aloft before stewards took him off the pitch and he was arrested, according to Arsenal communications director Mark Gonnella.

Earlier in the day in the second-tier Championship, Aston Villa midfielder Jack Grealish was punched by a pitch invader during a derby match at Birmingham City.