Anthony Joshua’s promoter Eddie Hearn insists he will do everything possible to set up a unification fight this year against Tyson Fury, saying “it has become the biggest fight in the history of the sport worldwide.”

Fury won the WBC world heavyweight title after stopping Deontay Wilder in Las Vegas to inflict the first defeat of the American’s professional career – 14 months on from their controversial draw in Los Angeles.

The vast majority of observers believed Fury was the rightful winner of that first fight, but he underlined his dominance at the MGM Grand on Saturday night with a resounding display in which he twice knocked Wilder to the canvas before the towel came in during the seventh round.

Fellow Briton Joshua holds the WBA, IBF, WBO and IBO titles after winning his rematch against Andy Ruiz Jr last year and Hearn believes the two camps now have a once in a lifetime chance to make a unification fight happen. 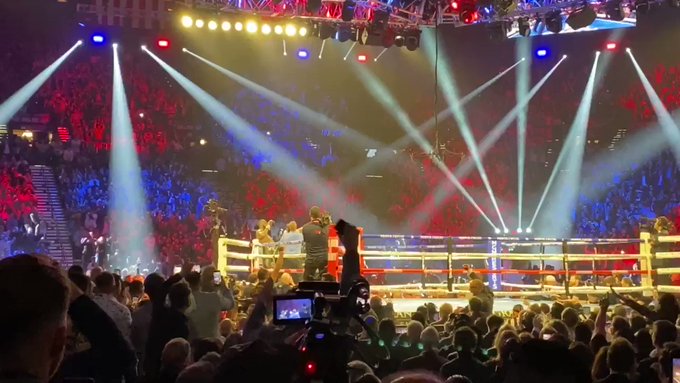 Hearn said on TalkSport: “What a time for British boxing. To have one world heavyweight champion would be great but to have two with all the belts, we will never see it again.

“I have said and I will make this clear, we have to make this fight happen. We will never get the chance for two Brits to fight for an undisputed heavyweight world championship.

“I will promise you we will do everything we can to make this fight happen.

“The first thing is that Wilder has the rematch clause. I don’t think anyone wants to see a third fight, it was that conclusive, but we will see if he wants to exercise that. I probably expect Wilder (to take the rematch). I don’t see where else he has to go.

“Our mandatory challenger Kubrat Pulev is also promoted by Bob Arum, Tyson Fury’s promoter, so there is a very easy manoeuvre there if Wilder doesn’t want the rematch to go straight into this undisputed fight in the summer. That’s what we have to push for initially.”

Hearn insists that Joshua is eager to step into the ring with Fury and would not be daunted despite watching his demolition of Wilder.

He added: “Our preference is to go straight into it because it would be undisputed. We will never get the opportunity in this sport to do it again with two Brits.

“I have already spoken to AJ, he wants this fight. He has zero fear of fighting Tyson Fury and he wants to be undisputed.

“Every country in the world will try to get this fight, for me it should happen in the UK. First things first, let’s get the fight made.

“I will promise you we will do everything we can to make this fight happen.

Fury was put in the same breath as the great Muhammad Ali after his stunning display against Wilder.

British former world cruiserweight champion Glenn McCrory believes Fury is boxing his way towards being considered among the greatest of all time.

McCrory said on TalkSport: “A while ago I said, and I was laughed at, that in years to come Tyson Fury will be remembered in the same ilk as Muhammad Ali and he is on his way.

“People said I was stupid, but there is nothing like the Gypsy King.

“He does things differently, the same as Muhammad Ali did, he names rounds and says how he will win and he goes out and does it. Ali is the greatest of all time but Fury is doing some great things in the heavyweight division.

“Now he has gone out there and totally dominated, smashed Deontay Wilder from pillar to post. He will want none of that. There is one champion in the world, he is number one and his name is Tyson Fury.”

Fury’s former trainer Ben Davison took to Twitter to pay tribute to the new champion and labelled it the “best story in boxing history”.

Congrats to @Tyson_Fury on a huge win and bossing his way to the WBC & Ring Heavyweight straps. Once again you showed up big. @BronzeBomber keep your head up and learn from this. #WilderFury2

737 people are talking about this

He wrote: “Credit goes to the fighter I always say that but fantastic job sugar hill and @AndyLeeBoxing too. Also Tyson family, brothers, father, wife and kids. THE BEST STORY IN BOXING HISTORY.

“Nobody ever tell me Tyson isn’t in the all time heavyweight great list now.

“If Tyson doesn’t get a return parade this country needs to seriously take a long look at itself.”

Lennox Lewis produced what is considered to be among the finest fights by a British boxer when he beat Mike Tyson in Memphis in 2002.

Lewis tweeted: “Congrats to Tyson Fury on a huge win and bossing his way to the WBC & Ring Heavyweight straps. Once again you showed up big. @BronzeBomber (Deontay Wilder) keep your head up and learn from this.”