The Super Eagles played out a thrilling 1-1 draw with Brazil on Sunday at the Singapore National Stadium to claim their first positive result against the five time world champions at the senior level.

Joe Aribo’s magically worked goal gave Nigeria a first half lead but the Selecao equalized early in the second half through Casemiro to force the former African champions to a score draw. 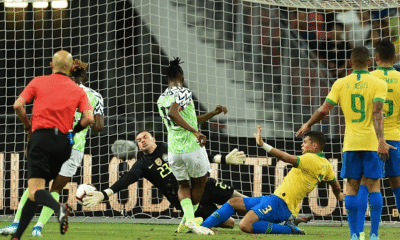 Osimhen Is Headed For The Top

The 20-year-old has been on fire since the start of last season, banging in goals and providing assists seemingly without end in Belgium as well as presently in France and the Super Eagles are now beginning to enjoy every bit of him.

Not many believed that the unceremonious exit of Odion Ighalo would not be sorely missed but this young Lille forward is already showing that his shoulders are strong enough to carry the Super Eagles to the desired future.

On Sunday afternoon, he almost stole Nigeria in front as early as the fifth minute when he outmuscled Thiago Silva before stroking a shot goal bound that Man City’s Elderson had to be at his best to keep out.

He did not score in Singapore but he was a handful for the Brazilians before he was hauled off for Paul Onuachu.

Francis Uzoho Is Getting Better

Gernot Rohr may continue his search for a substantive goalkeeper for the national team but in the meantime Uzoho is showing just enough to fill up that role.

The youngster has truly improved since his unconvincing displays at the 2018 World Cup. His new found confidence and better ball handling abilities were all evident as the Super Eagles kept the Selecao quiet in the opening half.

The goal he conceded was not his fault and he kept the team in the game with a string of fine saves.

He later cupped an injury and had to make room for Maduka Okoye to make his senior team debut but it is hoped that he would return soon.

However, a big shout out to Maduka who came on for the injured Uzoho and earned his debut without conceding.

The Mercurial Joe Aribo Is Here To Stay

The popular belief that the Rangers midfielder is only enjoying a run in the team because of the absence of some regulars is gradually becoming a fallacy.

When the likes of Ogenyi Onazi and Oghenekaro Etebo return to this team, they have to find for themselves another spot on the pitch as Joe Aribo has made that third midfield spot his own.

The Gers midfielder grabbed another goal after his debut strike against Ukraine last month- this one would have made even the magical Austin Okocha truly proud – to become the first ever Nigerian to find the net versus Brazil’s senior team.

Yet, he brings so much more to this team than just goals.

Aribo couldn’t be bullied off the ball. Nothing fazed him, as he almost never gave the ball away due to naivety or nervousness despite facing his biggest opponent till date.

Joe’s a delight to watch with the ball at his feet. He’s a hard worker too, with a double extra engine where a heart is supposed to be and when his teammates’ legs around him were shaking due to exhaustion, he was still there harrying and bullying the Samba Boys off the ball. My Man of the Match by a mile and a little more.

Steven Gerrard was right, this guy has the world at his feet.

Gernot Rohr Can Still Get More Out Of These Lads

The Eagles earned a credible draw against the Copa America champions, standing tall and drawing first blood but it almost feels like the South Americans were there for the taking but the Nigerian team just would not go in for the kill.

Late in the game, as Brazil tired and left gaps at the back, the German tactician threw in gangling Paul Onuachu when the pace of any of Peter Olayinka or Emmanuel Dennis could have turned a stalemate to a victory with one swift turn and swing of the boot.

There was no reason why the ineffective Alex Iwobi should have stayed on till the closing stages when a Ramon Azeez was cooling his feet in the bench.

Evidently, the Super Eagles coach does not trust any of these newly invited boys just yet and things should return to normal when the likes of Samuel Kalu and Ahmed Musa make their comeback.
Otherwise, Rohr’s excessive use of the handbrake will be the death of this young team.

The Golden Generation Is Here

The Nigerians were truly impressive in the first half and showcased a lot of the attacking prowess that will trouble more than a few teams going forward.

But more than the Super Eagles’ highlighted forward line, the defense showed a resilience and solidarity that is not often on display. Jamilu Collins and William Troost-Ekong produced performances that reminded fans of the good old Celestine Babayaro and Taribo West days.

Wilfred Ndidi is as solid as some of the best defensive midfielders this team has ever had in decades past. And the Leicester City man’s partnership with Joe Aribo should work wonders in the coming days against lesser foes.

Upfront, Chukwueze and Osimhen are developing into a scary proposition.

Against Brazil, there was a lot of solidarity, resilience and teamwork on show: players helping teammates out, players defending as a team, team staying true to the principle of playing out from the back despite facing a formidable foe, and a bunch of sweet, stubborn boys refusing to be scared of their more illustrious opponents.