Neymar scored a fine late winner as Paris Saint-Germain beat Lyon 1-0 on Sunday to move three points clear at the top of the Ligue 1 table.

The Brazilian finally beat Anthony Lopes, who had pulled off numerous impressive saves, with three minutes of normal time to play at the Groupama Stadium.

It was Neymar’s second winning goal in as many league games since being reinstated to the team following a protracted transfer saga which saw him attempt to force through a return to Barcelona.

“Neymar can do better,” said PSG coach Thomas Tuchel. “It’s the second or third game in four months for him. He’s not at 100 percent capacity.”

“He is not at his limit. He can do better, he will do better. He’s going to get to his best level, with matches and decisive goals like that, it’s going to help him.”

The Parisians sit top on 15 points after Angers and Nice both won over the weekend to temporarily join Tuchel’s side at the summit, and followed up their impressive midweek Champions League victory over Real Madrid with the win in constant drizzling rain in Lyon.

Sylvinho’s Lyon remain in ninth place and are without a win since mid-August. 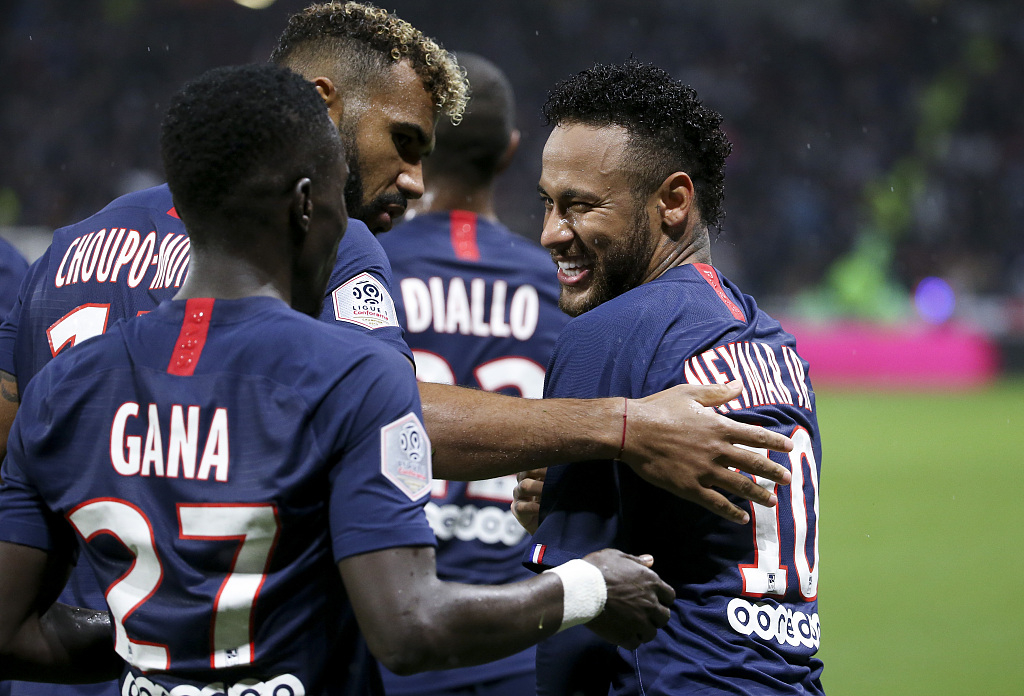 Neymar (R) celebrates his winning goal with teammates during the Ligue 1 clash between Lyon and PSG in Decines, September 22, 2019. /VCG Photo

PSG were without the attacking trio of Kylian Mbappe, Edinson Cavani and Mauro Icardi due to injuries, while midfielder Marco Verratti started on the bench.

The best of the early chances fell to Neymar on 22 minutes but his effort was superbly saved by Lopes.

Neymar was denied again by another tidy Lopes stop four minutes before the break as the Portugal international tipped the Brazil forward’s dangerous free-kick over the bar.

PSG’s domination from the first half carried over into the second 45 minutes.

Abdou Diallo had the pick of the chances, using the wet conditions to glance a header from a Neymar corner over the crossbar.

The world’s most expensive player was targeted by home fans when taking set-pieces from the left-hand side as they threw plastic bottles and rolled-up bin bags at him.

With 87 minutes on the clock, substitute Verratti found Neymar in the box who dribbled into space and finally beat Lopes to the keeper’s left with a low shot.

He celebrated by running towards the same corner of the ground where he had earlier been taunted by the Lyon supporters.