Friday morning saw Arsenal announce that they had parted company with Unai Emery following a disastrous run of results, yet there are a number of isolated reasons which helped push the Arsenal board of directors to this decision.

Despite having guided the Gunners to the Europa League final in his debut season in north London, relations between Emery and the club’s fanbase soured somewhat in recent months after a sluggish start to the 2019/20 season.

Emery was told of his dismissal prior to Friday morning’s training session, which was taken by Ljungberg, and the former Sevilla coach will look back on several factors that contributed to his downfall.

Finishing fifth in 2018/19 left a bitter taste in the mouths of Arsenal supporters, given the fact they were in control of their own destiny with four matches left of the Premier League season.

The fact they then lost the Europa League final in such a poor display added to the fact they had missed out on the Champions League for a third straight year.

Over the last two months, Arsenal haven’t won a single game in a run of seven matches, which is their worst run since 1992, when George Graham was in charge.

Their league position is no longer encouraging either, with the London club sitting eighth, a worrying eight points adrift of the Champions League qualification spaces.

As one of the first real big clubs to fail significantly in the social media era, Arsenal fans have been long-suffering, having not won a league title since their invincible year in 2003/04, and this has caused an increased lack of patience amongst supporters.

Frustration at results and general apathy towards the club’s direction under the Kroenke family have seen attendances dwindle.

One of the in-jokes for years at the Emirates Stadium was how the real attendance wasn’t announced at games; instead the tickets sold for the fixture were read out. Of course, this was the procedure at most Premier League clubs, but it became somewhat of a point of note in north London.

Thursday, though, saw an unwanted development as there were only 49,419 tickets sold for the match, and even after that there were several thousand less actually in the ground making use of their seat.

‘Emery Out’ placards were seen throughout the stands prior to the defeat to the German club, whilst groups of Arsenal supporters, be that online or in the ground, urged the club to make a change.

Last night more than half of Arsenal’s season ticket holders didn’t bother attending the match despite having paid for their tickets. Those that did were left frustrated and angry at a performance and defeat that represented Arsenal’s worst run of results since 1992. 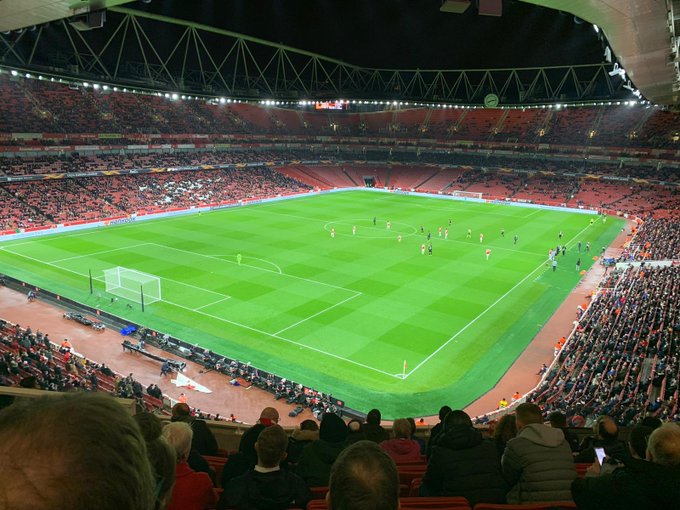 Things can’t go on like this. The club needs decisive action to address this. There should also be greater accountability from the new football management personnel as to what they are doing to address Arsenal’s decline. 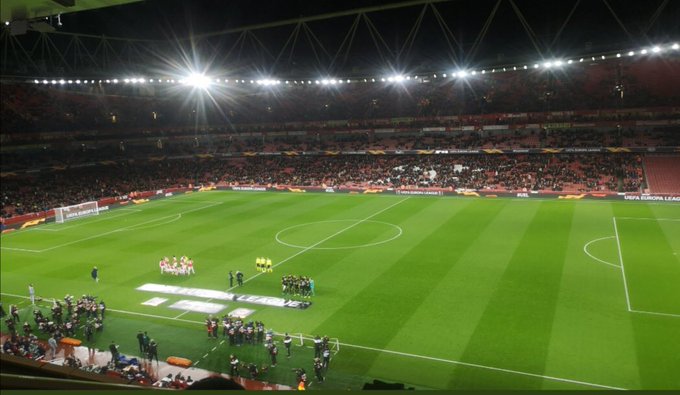 19 people are talking about this

A lack of a defined style:

As part of the banner asking for Emery to be sacked, the phrase ‘no tactics, no formation, nowhere to hide’ was printed upon it.

Whilst this was a somewhat simplified view of the work the former PSG coach was trying to do, it was admittedly difficult to describe the style with which he was trying to get the team to play.

However, none of them solved the problem of defensive solidity, whilst there appeared to be frustrations in attack as the free-flowing style of the Arsene Wenger years dissipated entirely.

This was a problem that pre-dated Emery‘s arrival, but nevertheless it was one which wasn’t corrected on his watch, even though a number of defenders arrived during his tenure.

Goals haven’t been easy to come by either, and the Gunners are the only team in the top half of the Premier League table with a negative goal difference.

Even on occasions when the team’s attacking play would click, their defence would let them down, as was the case at Anfield in the 5-5 draw in the Carabao Cup.

Much of the early controversy about this season was how Emery had frozen Mesut Ozil out of the team, yet there have been disturbances based on how the Spaniard was using Pierre-Emerick Aubameyang and Gabriel Martinelli, too.

Nicolas Pepe hasn’t yet found form at the Emirates Stadium, whilst Alexandre Lacazette was often asked to play confusing roles in forward positions, usually when the team were in a difficult position.

All these problems pale in comparison to one which erupted just prior to the recent international break, when Granit Xhaka was roundly booed off the pitch by Arsenal fans due to general distaste for his performance and the fact he wouldn’t run off the pitch while the team were still in need of a goal.

The captaincy, which was only handed to Xhaka by a player vote, was withdrawn from the Swiss international and he wasn’t part of the team until the defeat to Eintracht.

It was an issue which needed leadership and good man-management skills, and Emery will perhaps look back on how he dealt with it with a degree of regret as it certainly didn’t strengthen his own position.

Emery has become the first Arsenal coach to be fired midway through a season since Graham himself in February 1995.