Rafael Nadal enjoys a well-earned reputation as tennis’ long-reigning king of clay — but on Sunday, Nadal reminded the world he’s anything but a one-surface wonder. The 33-year-old Spaniard reasserted his mastery of the hard court, as well, claiming his fourth career U.S. Open title over an opponent roughly a decade his junior.
After four hours and 50 minutes of spellbinding tennis, the Spaniard had just rallied to beat Daniil Medvedev 7-5, 6-3, 5-7, 4-6, 6-4 to lift his fourth US Open title and his 19th career grand slam.

Nadal defeated Daniil Medvedev in a five-set humdinger in New York City, 7-5, 6-3, 5-7, 4-6, 6-4. To do it, he had to fend off a furious rally by the 23-year-old Russian, who, after ceding the first two sets to Nadal, stormed back to push his celebrated opponent to the brink — and extend the marathon match’s final running time to nearly five hours.

But Nadal ultimately steadied his course, breaking Medvedev’s serve twice in the final to seal the victory and buttress his position in the record books. The win makes for his second Grand Slam title of the year, after he won the French Open — yet again — in June. It also gives him his 19th career Grand Slam, placing him just one title behind arch-rival Roger Federer, who currently owns the men’s singles record.

After the match, Nadal wept as the stadium in Flushing Meadows played a string of highlights from his career. He called it “one of the most emotional nights of my tennis career.”

“The last three hours of the match have been very, very intense, no?” Nadal said. “Very tough mentally and physically, too.”

For all the history Nadal brought to Sunday’s match, and all the edge in experience he had over Medvedev — a newcomer to the U.S. Open final — Nadal’s win did not come easily. Despite clinching the first two sets, the Spaniard saw the next two slip away on broken serves. What looked early on like a possible cruise to triumph ended up taking about 4 hours, 50 minutes, in what became one of the longest matches of Nadal’s considerable career. 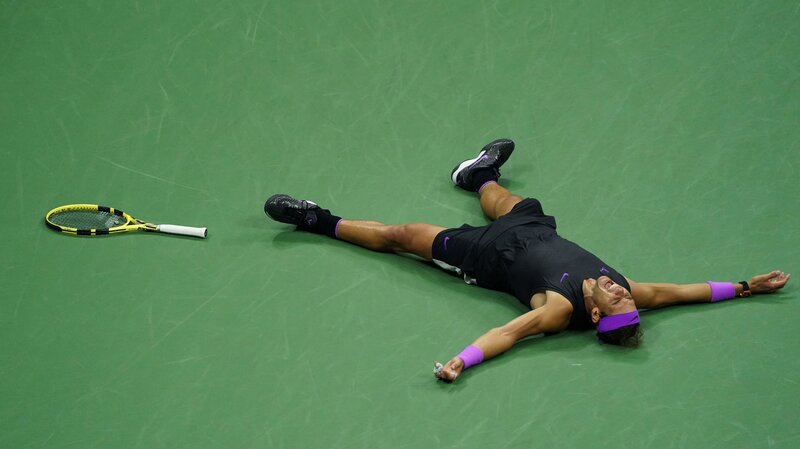 “The way that he was able to fight, to change the rhythm of the match, was just incredible,” Nadal acknowledged afterward.

Medvedev, for his part, made clear that the respect was mutual.

“What you’ve done for tennis in general,” he told Nadal at the trophy ceremony, calling his career Grand Slam total simply “outrageous.” “I mean, I think 100 million kids watching you play want to play tennis, and it’s amazing for our sport.”

Sarri says jeers would be a sign of affection