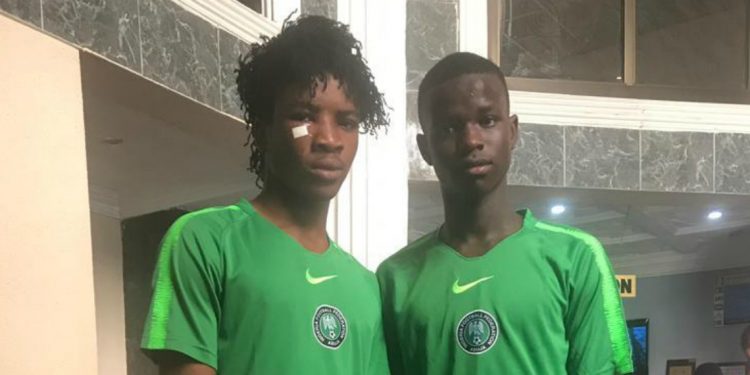 the 21 players picked by coach Manu Garba for the U17 FIFA World Cup, which kicks off on October 26 in Brazil.

He is the team’s No 1 shot stopper after he replaced the fumbling Suleman Shuaibu at the U17 AFCON in Tanzania.

Goalkeeper who has since been released by AFC Bournemouth Academy. He was also in Tanzania, but did not see action. He commands his goal area with a lot of confidence.

Eaglets Squad: Who Is In, Who Is Out?

He is from the West Ham Academy in England and will be third choice in Brazil.

The only player promoted from the Nigeria U16 team to the Golden Eaglets. He now plays in the heart of the defence in place of David Ishaya, who was the team’s pillar in Tanzania but missed the trip to Brazil no thanks to a niggling ankle injury. He is striker-turned-defender who is effective and cool under pressure.

Enjoyed a great central defence partnership with Ishaya at the U17 AFCON so much so that he was noticed by several European clubs.

Fullback who was picked ahead of Ogaga Oduko, who was in Tanzania. Loves to join the attack and scored a great goal against Korea in a World Cup warm-up in Brazil this week.

A recent addition to the back four, which coach Manu Garba has insisted must improve on dealing with set pieces.

The exciting IB Sports Dreams of Abuja star has bounced back to top reckoning after he featured at last year’s zonal qualifiers but missed out on the trip to Tanzania after he fractured his leg. The right fullback could also play as a right wing back or in the heart of the back four. Has great techniques.

Highly-rated defensive midfielder who has been part of the team right from the zonal qualifiers, where he was voted the MVP of the tournament. He stabilizes the midfield and has a good long ball.

Defensive midfielder from FC Hearts who made a late push to make it all the way to Brazil. ‘Dada’ has already caught the attention of Super Eagles coach Gernot Rohr after he featured at the Bayern Munich World Youth Cup in Germany earlier this year.

Stocky, bulldozing midfielder who caught the eye at both the Zonal qualifiers and the AFCON proper with his purposeful display upfront. He has already been linked with several top European clubs.

Midfielder on the books of Kano academy Falala, who scores his own fair share of goals. He was in Tanzania, but did not see a lot of action.

Exciting left-footed winger or midfielder who scored a great individual goal at the U17 AFCON in Tanzania.

Left-sided winger who has shone in the team’s World Cup warm-ups in Brazil thus far.

Another late gate crasher to the squad after he was not part of the squad at the various major tournaments involving the team.

Also another new addition to the squad, who will mainly be a cover in the team’s engine room.

Hard working striker who is armed with a decent shot as he proved at the U17 AFCON. He was recently at Belgian club Anderlecht.

The team’s star striker from ABS FC. He is powerfully built and in Brazil could follow in the footsteps of great schoolboy stars like Kelechi Iheanacho, Isaac Success and Victor Osimhen.

The Enugu-born striker has come through the various age levels after showing great promise at a very young age.

Recent discovery who will have to step up his game if he hopes to enjoy game time in Brazil.