England made a winning start to their Women’s World Cup campaign as they saw off debutants Scotland 2-1 in Nice.

In front of a crowd of 13,188 at the Allianz Riviera, Nikita Parris put the Lionesses ahead with a 14th-minute penalty awarded for handball via VAR and Ellen White’s curled finish made it 2-0 in the 40th minute. 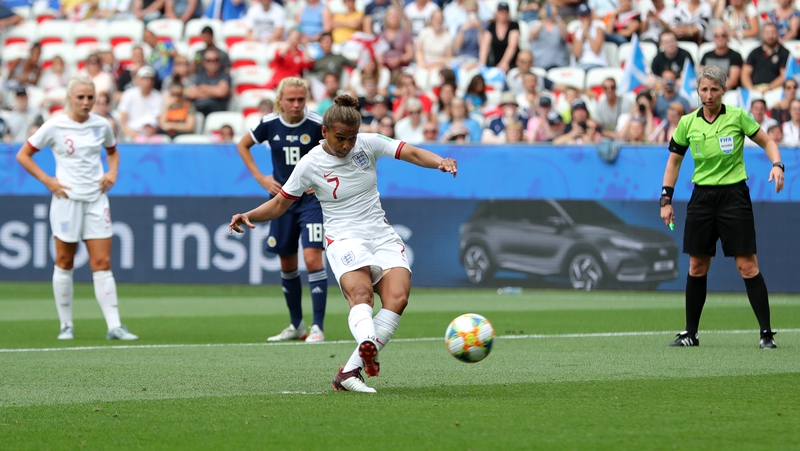 Having looked very much in control for most of the game, Phil Neville’s team, who were denied by some fine Lee Alexander saves and had two efforts chalked off for offside, then endured a nervy finale after Claire Emslie pulled a goal back with 11 minutes remaining.

While Scotland could not save themselves from defeat, they will take heart from their efforts in their first Women’s World Cup finals appearance, two years after being thrashed 6-0 by England in the last meeting, at Euro 2017.

The teams next play on Friday when Shelley Kerr’s Scotland face Japan in Rennes before England take on Argentina in Le Havre.
Enland manager Phil Neville was “pleased with the result” but not the performance and told the BBC: “The first game is always the most difficult game.

“I want us to play like we did in the first half for 90 minutes. We need to be relentless now as we want to be here for the next 37 days and to do that then every single one of us, myself included, have got to keep driving the standards all the time. The standards start with me.

“At 2-0 it is always a dangerous scoreline and we needed a third goal. Scotland have got good players, they’re a good team.”

Scotland manager Kerr said: “England are tipped to win this tournament so to run them so close, especially in the second half, is a positive.

“I didn’t think we played particularly well in the first half but I’ve got to give England credit because they played with intensity and put us under pressure in the right areas and got their two goals.

“I think we came out in the second half and showed what we are capable of.

“I don’t want to comment on the VAR decision because the referees and the officials have got a very difficult job. What I want to do now is applaud England for their performance and we need to dissect our performance.

“We came into this tournament for the first time knowing that we just need to win one game.

“It would have been nice if it was the first one and we got something out of it but it doesn’t have to be. We regroup and rest and recover and then go again against Japan.”